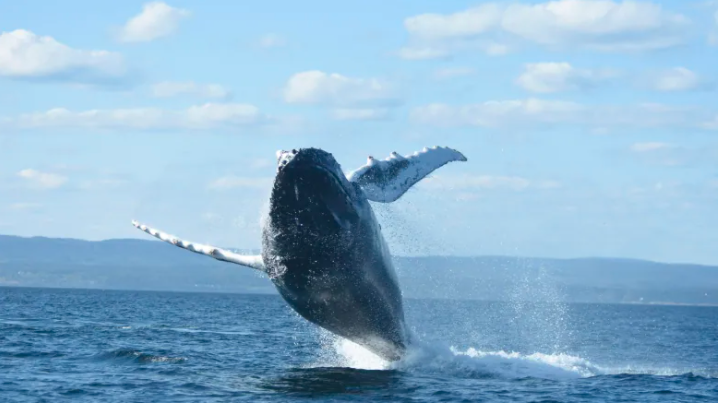 The captain of the Grand Fleuve is aboard his vessel looking out at the St. Lawrence River off the shores of Tadoussac, Que.

“As I’m talking to you,” Marc Hébert said on his phone, “I’ve got three humpbacks about 500 feet away from me jumping in the air.”

The best whale-watching season of Hébert’s 25-year career will wrap up in two weeks — and he intends to cherish every moment until then.

DesRochers said he hasn’t seen a whale season like this in decades.

“All summer long, almost every day there were whales breaching, which is something I’ve never seen in the last 30 years,” he said.

The whales have been putting on a show since they started arriving in the Saguenay–St. Lawrence Marine Park last spring. They settle in the estuary to feed on krill, fish and crustaceans — fattening up — before swimming down to the Caribbean for winter.

“What is very spectacular and exceptional is the number of humpback whales,” Robert Michaud, a marine biologist and scientific director for the Group for Research and Education on Marine Mammals, told Quebec AM.

Compare that number to the one lonely humpback that visited the area in the 1990s — a large male named Siam. A few years later, Siam was joined by a female named Tic Tac Toe.

Why there are such impressive numbers of whales this season remains a mystery to the marine biologist, but Michaud has theories that point to climate change.

With less ice in the winter and warmer waters in the summer, Michaud said water is rising, currents are shifting, and this all affects food distribution and concentration.

For clues to this summer’s whale abundance, Michaud looks to the tale of the right whales, which he calls “climate refugees.”

In 2015, right whales were newcomers to the St. Lawrence, Michaud said. As water temperatures rose, copepods, a kind of crustacean and the right whale’s main source of food, moved north to cooler water.

“Now we have a larger concentration of copepods in the Gulf of the St. Lawrence, and more right whales,” said Michaud.

Since humpbacks have a more diverse diet than right whales, and no studies from this summer are out yet, Michaud isn’t drawing any conclusions.

“This was a summer with no clear explanation,” he said. “But for the moment it’s just a festival.”

Have you caved and turned your heat on?